“Darling we are flying to Singapore!” Bello announced bolting through the door like a large friendly Labrador-Bear as I jumped out of my skin on the couch. Why? “Because we work…a lot.” Bello explained goofily rolling his eyes, before barraging me with the bony-phalangeal assault he calls tickles.

I crumbled helplessly and three weeks later we did exactly that. We flew to Singapore for a tickle enforced no questions get-away. 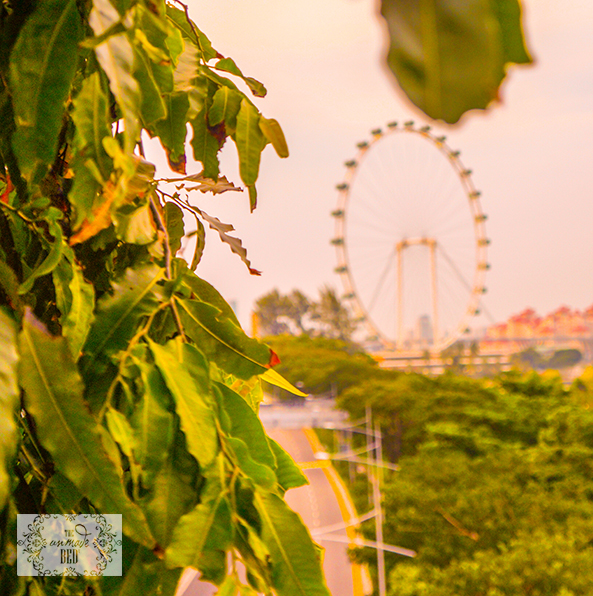 The day was warm and balmy and we filled it with lots of sightseeing, a lovely lunch at the best Wonton Noodle joint in town (at Bello-the-wonton-king’s insistence) and what became a cookie frenzy with a friendly American we befriended along the way. 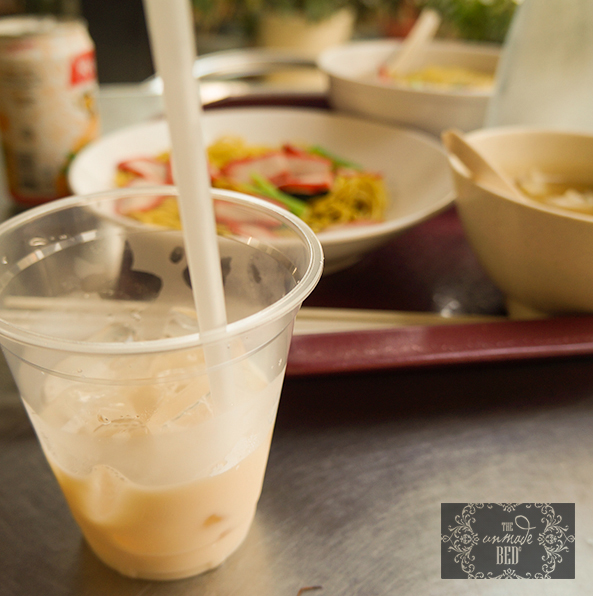 At our pit-stop back to the hotel we freshened up for dinner…and by freshen up I guess I mean we hunted for a lost pair of heels, had a mild perfume war and then I got rugby tackled when I tried to put makeup on.

Basically Bello doesn’t endorse war-paint…even if it is from Mecca Cosmetica.

At six foot two and exactly double my weight, I’m not taking bets about who won that debate. We piled makeup-less (;/) into our taxi. 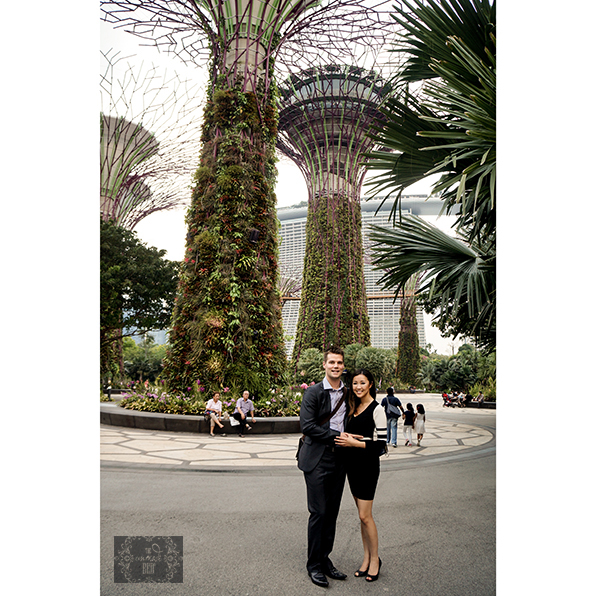 We arrived early to Marina Bay Sands and after a relaxed walk through Gardens by the Bay, Bello remembered I had a thing for gondolas. Before I met Bello, I did Venice as a trip by myself and I met the most amazing people. It was the best thing I had ever done before I met Bello, so he knows, I will eventually drag him there and he owes me some serious hand-holding in the hull of a gondola.

“For now.” he smiled disarmingly helping me into our Marina Bay Sands Gondola. I melted into a puddle and we cuddled our way past the likes of Victoria Secret and other shops I just don’t remember. 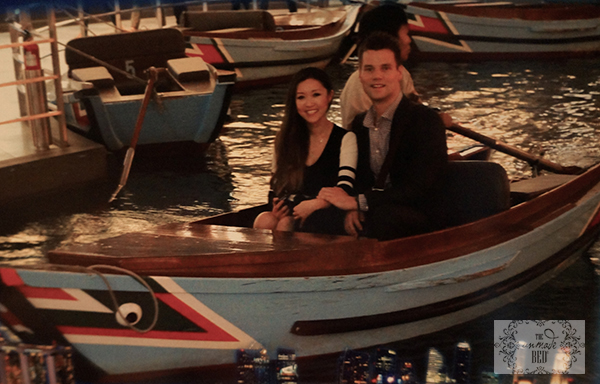 We arrived at Spago giddily touting our overpriced gondola snaps for a dinner date with our friends, Jet and James. Strangely, the usually super-punctual duo were late, so we ordered some drinks and Bello left me at the bar to ‘give them a call’.

He returned kinda flushed and a bit less cool calm and collected than normal.

But it’s okay. I still didn’t get it. 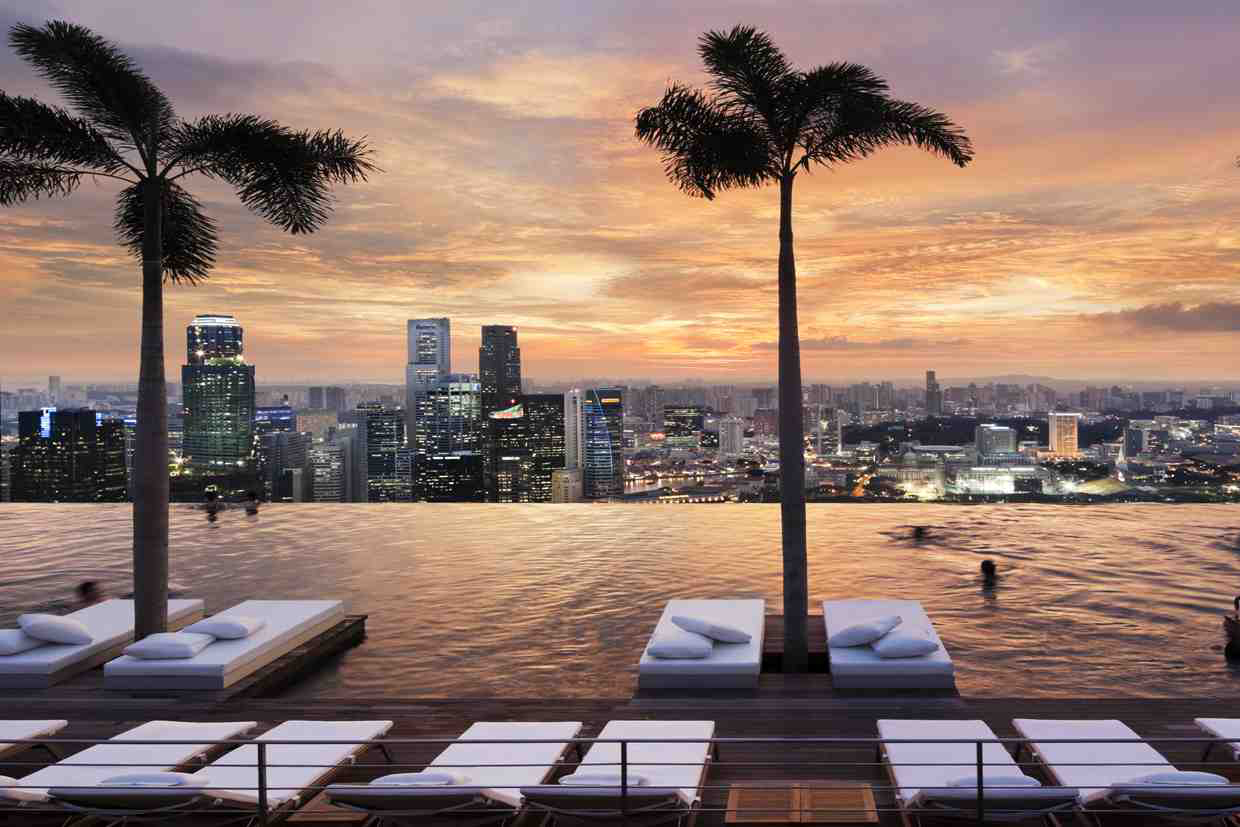 We cozily settled into the sofa, Bello’s arm draped across my shoulders. It was a perfectly balmy evening, the tropical air smelled kind of sweet as the setting sun threw brilliant hues of gold over us. The weight of Bello’s heavy arm felt like a shield from the world as we inspected the cocktail menu waiting for our friends to arrive.

As one drink led to two, we poured over all the awful innuendos we could find in the menu and before we reached paramount levels of immaturity, a waitress appeared. Flustered and on edge she practically took me by the elbow to escort us to our table. I looked across at Bello as she semi-dragged me away from him. There must have been some mild panic on my face. The smile that spread across his handsome face turned dashingly devillish as he shrugged his broad shoulders innocently. The gentle tan we had picked up these few days dusted his skin to a light gold and his teeth look whiter than ever.

A beautiful table was set before us, golden with candlelight and covered in a hundred roses.

So naturally, I walked right past it.

The waitress and Bello collected me gently by the elbow and brought me back to the table and explained to me that this was actually our table.

“Ohh” I breathed, eyeing the roses,

Then it occurred to me. James, (who is famously known for being super romantic) was at it again!

I smiled at the lovely surprise awaiting my lovely friend Jet and then continued my conversation with Bello, distractedly seating myself on the opposite end of the table. The waitress at this stage melted into a bundle of flailing arms as she coaxed me out of my chair to seat me beside the roses. Barely noticing the waitress’s hyperventilating, or that I had sat in the wrong spot I continued my deep conversation with Bello.

Honestly. I’m not even that talkative normally. You see, it’s just that I was in the middle of telling Bello a really funny story.

Such an unfortunate time for me to not shut up.

Bello cleared his throat to cut off my story. I guess it had to be done. To be honest, I was mildly offended. But that melted away pretty quickly when he took my hand in his and recommended so gently, with those piercing green eyes and that handsome smile- that perhaps I could read the card.

Don’t worry at this point. I still wasn’t getting it.

I opened the corner of the card to take a peek inside… really carefully. After all, I didn’t want to ruin Jet’s card.

It hit me like a train. We were going to help James propose to Jet?!!

“Oh my God? Where’s JAMES?!” I giggled excitedly, scoping the room to find the best hiding spot for us to duck into. We were going to ruin his surprise!

I looked at Bello confused that he wasn’t ready to go into hiding with me…I locked my fingers in his ready to drag him toward the cognac cabinet… my mind raced, Jet and James would be here any second!

I will never forget the look on his face when he realised I still didn’t get it. 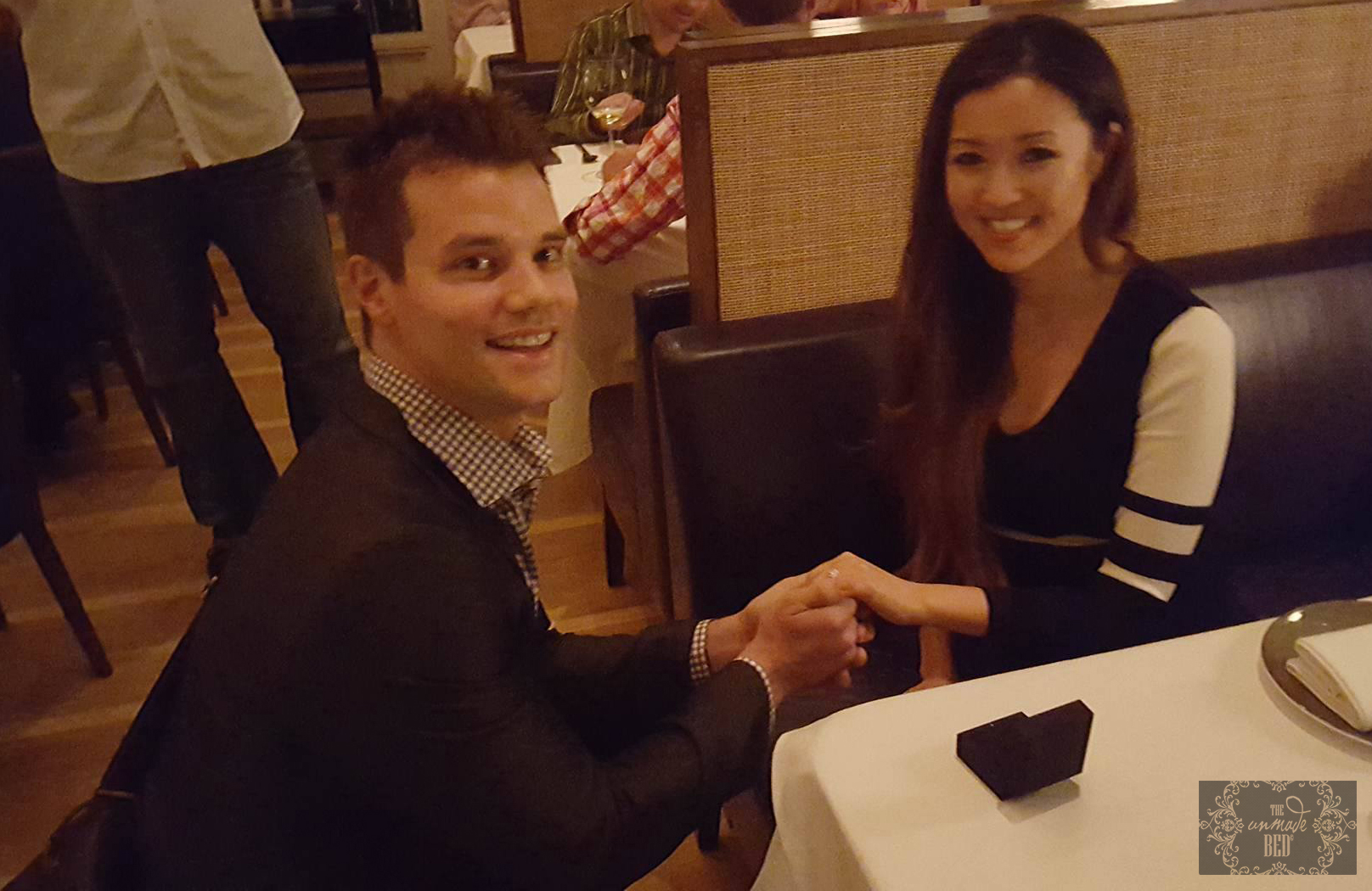 He did have to spell it out to me…

Oh and Mrs K, you raised a gentleman, he proposed on one knee…that was about the time it clicked.

My original answer was “Oh… me?”

Then of course yes! Your son made me cry so much. The restaurant was laughing, clapping and most unfortunately… watching this whole time. One lady was actually crying as much as I was, but I think it’s because she was laughing that hard.

These photos were Jet and James springing out of hiding and taking non-stop photos like the wonderful supportive friends they are!

“So…you really didn’t get it? ” Dad asked imploringly with his hand over his forehead when we recounted the story to him later on. My mother snickered at his distress … Nope. I didn’t Mum and Dad! (Don’t roll your eyes at me, I’m your gene-pool :p)

So there it is, our story! But to be honest, I guess our proposal story really started years ago, right back to before the time we got caught in an anti-cyclone (now that is another good story)! But when the ocean went dark and eerily lake-calm and the tide pulled us out on our catamaran… I had looked up at Bello in one of those wordless moments and he had buried me in his arms. That moment. The turning-point moments in life that play out better than in the movies.

I guess our proposal story is really a collection of moments over these years. The best years of my life. So far. 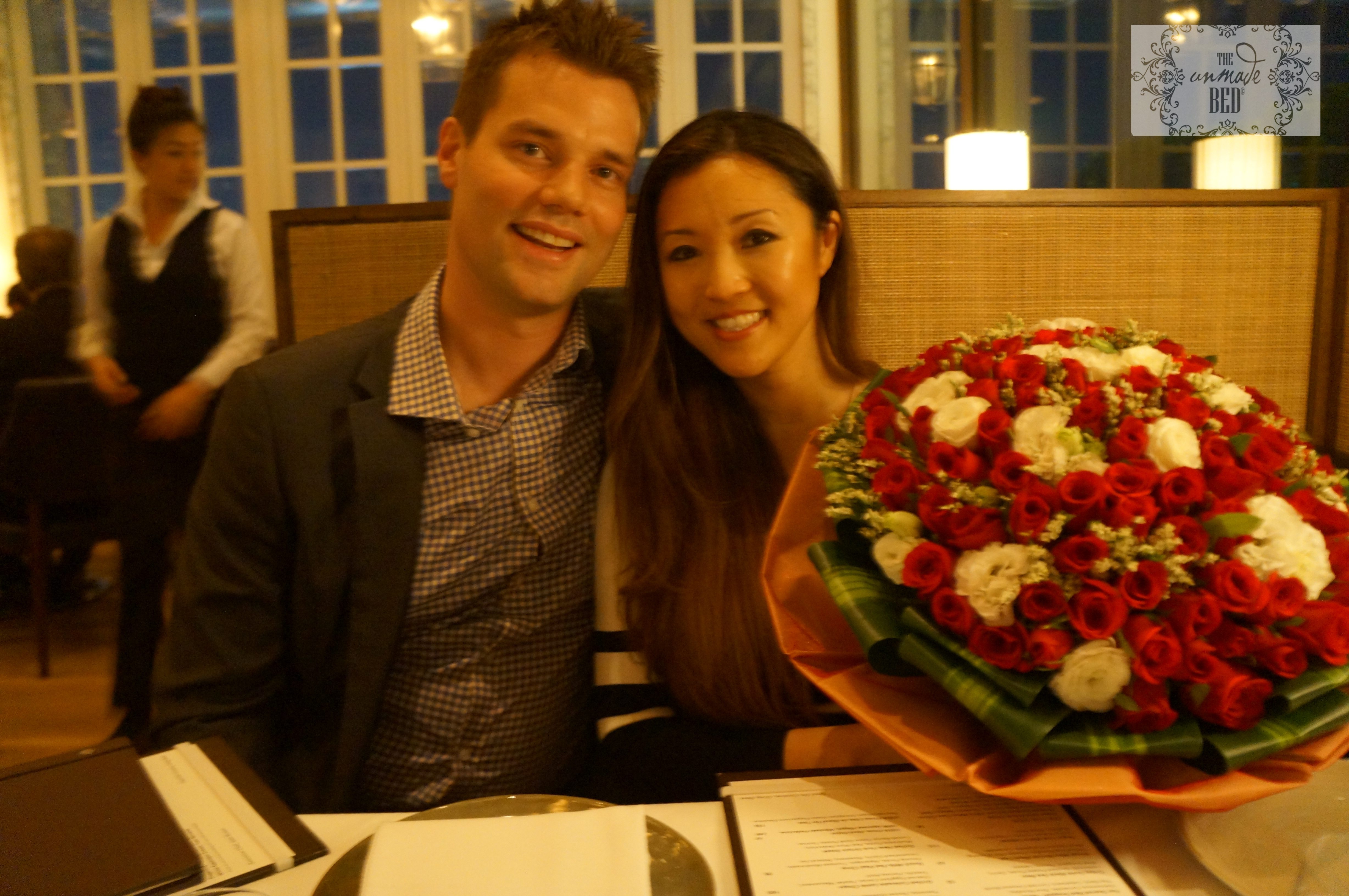 As always, thank you for reading! To all of you out there also newly engaged, congratulations!! Do you have a wonderfully romantic and magical proposal story? Or perhaps you are as dopey as me? Well, we would absolutely love to hear from you, so please share! 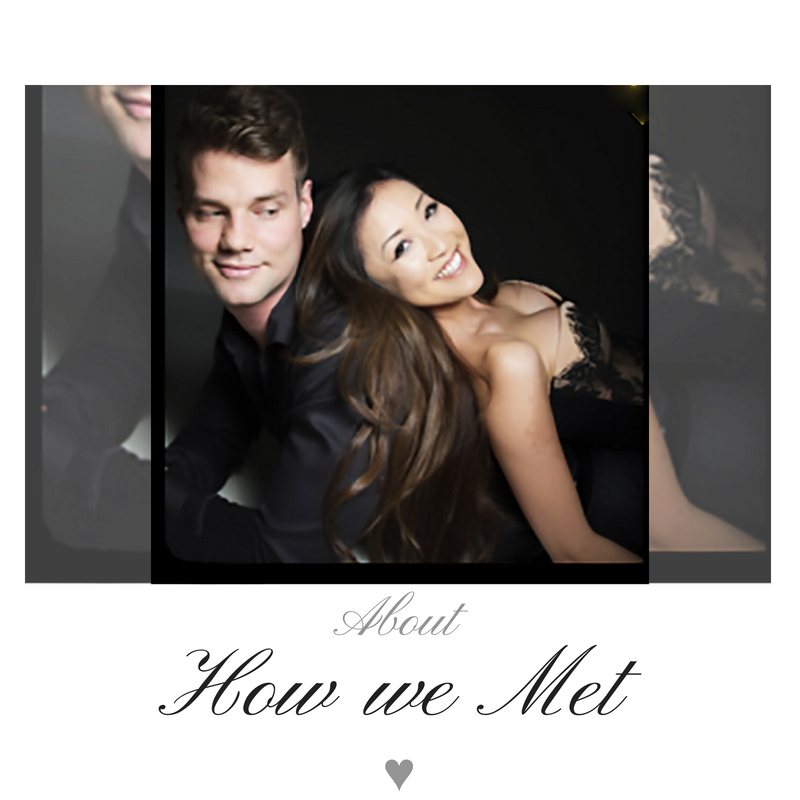 Or…
Read more on packing travel tips for your next adventure!